These first 3 were taken a while back at a Fire Station Open House.

The second photo in this group is a close up of the part circled in the third photo which, incidentally, was taken by the firefighter in the 4th photo who was nice enough to take the picture for me (too bad I didn’t have a secondary camera to to get a photo of him taking the picture of the equipment for me)…. Did I just loose you? 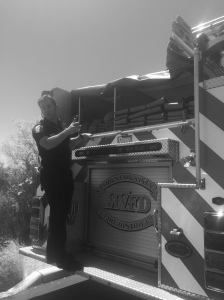 This picture I took while doing a ridealong w/ the local fire department a while back. The TV show that was playing in the main room at the time was reflecting unto one of the apparatus in the bay (this was during a down time when the firefighters were taking a break from their duties).

This was a group of firefighters doing the “Climb 4 The Fallen” Stair Climb.

This is just a fun photo I took of a “Fire Ground Survival” Poster while visiting the Phoenix Fire Department a several years ago.

This Week’s Challenge, btw, is Fountains….

It’s not a fountain but this was the closest I could come up with. The skies that day seemed to dump water like a fountain turned on high.

Play challenging online games, laugh at funny jokes, build amazing projects and find lots of fun at the online home of Boys\' Life, the official youth magazine for the Boy Scouts of America.

Tripping Over Pebbles No More

Rants, raves and ramblings about whatever takes my fancy