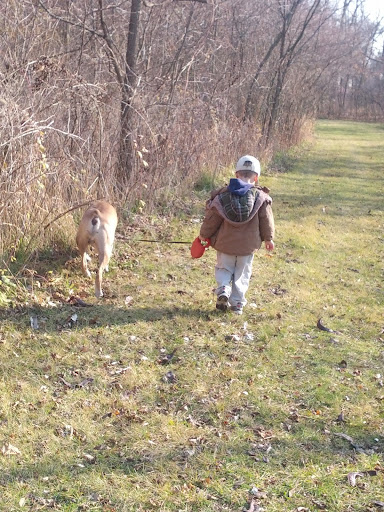 Beverly watched from her kitchen window as her son, Jason, headed towards the path that he always gook when waking the families only dog.   They had had two dogs but the other had died recently due to Iron Poisoning.  Beverly couldn’t believe how fast her boy was growing up.  He was small for his age, but was big enough now to walk the dog to a nearby park on his own.  In the small town in which they lived, where everyone new everyone, Beverly felt comfortable in allowing her son to go there on his own.

Normally, Bench (whom Jason had named because he had found him, as a small pup, huddled under a bench one full-moon night) would be allowed off his leash to run once at the park.  Bench was very well behaved and always came back with just the slightest whistle.  But Beverly had given Jason the rule that unless she (or his father) was with him, Jason was to keep Bench on his leash at all times.  As far as Beverly knew Jason had always followed this rule.

Beverly continued to watch.  Soon dog and boy were out of sight.  Beverly went back to making another batch of honey-bread. She had been making bread most all morning to fill orders she had gotten both from local town folks as well as some from neighboring towns.  Beverly made her special bread using homemade honey from the families very own bees.  She remembered being a bit fearful of dealing with bees at first and had let her husband Brian take care of the bees.  Beverly was still a little nervous about getting honey from the combs and preferred to let her husband gather the honey.  But she had found that, if needed to, she could do the job.

Many of Beverly’s neighbors and friends had raved about her Honey-Bread saying that she could easily sell the loaves they were that good.  Beverly wasn’t so sure at first, but figured she had nothing to loose in giving it a go.  The first dozen loaves she had made had sold quickly and there had been orders for even more.  Beverly began to think that just maybe something would come out of her love for baking.  She knew that the family didn’t really need the extra money from selling the loaves as they got by just fine on Brian’s income, and even had a little left over at the end of the month for a “fun fund”.   But they didn’t have extra money to put aside for Brian to go to college and she figured the extra money from selling the bread could go into a University Fund for Brian to use for just that when he got older.